The United Kingdom Maritime Trade Operations (UKMTO) said on Tuesday that the incident had been reported in the Gulf of Oman, 61 nautical miles north of the coast of the port of Fujairah in the UAE.

The UKMTO, which is run by Britain’s Royal Navy and acts as a relay point for information on maritime security between military and private entities, cited third-party sources, and no further information was provided on the vessel or the incident.

“Vessels are advised to exercise extreme caution when transiting this area,” a statement by UKMTO said.

CNN could not independently verify the incident, however, three ships in the waters changed their status to “Not Under Command” as per MarineTraffic.com, a website which tracks maritime activity. It is unclear if these status changes were related to UKMTO reported incident.

The US Coast Guard defines the term “not under command” as meaning “through some exceptional circumstance” a vessel is “unable to maneuver as required” by international maritime rules. 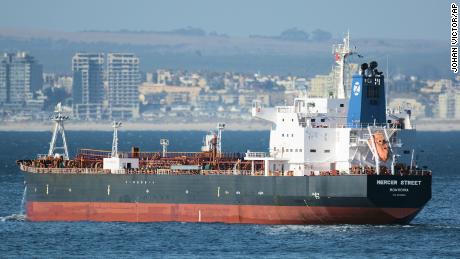 US State Department spokesperson Ned Price said Washington is “aware of the reports of a maritime incident in the Gulf of Oman.”

“We are concerned, we are looking into it, we are coordinating with partners, but at this point I just don’t have anything more for you on it,” Price said at the daily briefing Tuesday.

The Persian Gulf and Arabian Sea have seen a rise in attacks in recent months, including a drone attack on an Israel-linked tanker last week.

Two people, a Briton and a Romanian, were killed when the tanker Mercer Street was attacked by a drone off the coast of Oman. The United States, Israel and the United Kingdom have blamed Iran for the attack, which Tehran denies.

Iran moved quick to deny any involvement in Tuesday’s alleged incident in the Persian Gulf and Sea of Oman, with Ministry of Foreign Affairs spokesman Saeed Khatibzadeh telling Iranian news agency Tasnim that the country’s armed forces had not entered ships operating in that area, as reported in some western media outlets.

The spokesman described the reports as suspicious, and emphasized that Iran’s basic policy is to establish stability and security in the Persian Gulf and the Sea of Oman, as well as having its naval forces assist the passing ships in the region in case they broadcast SOS messages.

The location of Tuesday’s alleged incident is in the vicinity of the Strait of Hormuz, the narrow waterway into the Persian Gulf through which 30% of the world’s seaborne crude oil passes each day, according to the International Crisis Group, an independent organization which monitors potential conflict flashpoints worldwide.