Belarusian sprinter Krystsina Tsimanouskaya is safe after refusing to get on a flight from Tokyo on Sunday after forcibly being taken from the Olympics to the airport by her team.

She was removed after she criticized sports officials, according to an NGO that supports athletes in conflict with Belarus’ authoritarian regime.

The 24-year-old athlete had objected publicly to being entered into the women’s 400m relay at the Games by Belarus’ athletics federation without prior notice. She said she had never raced in the event before. 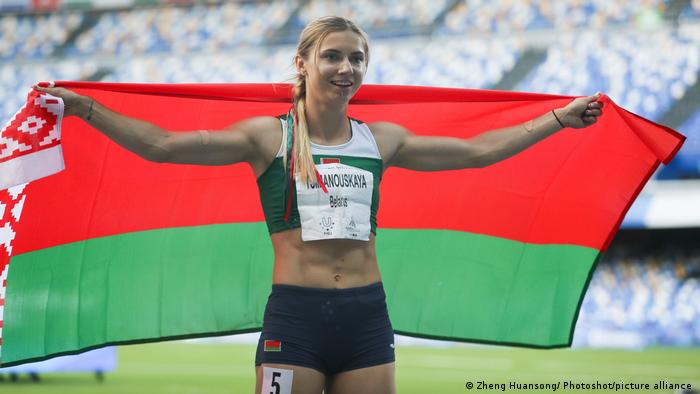 Tsimanouskaya, seen here in Italy in 2019, was due to run in the 200-meter sprint

Tsimanouskaya said coaching staff had come to her room on Sunday and told her to pack. She said she was then taken to Haneda Airport by representatives of the Belarusian Olympic team.

But she refused to board the flight, telling news agency Reuters in a message over Telegram: “I will not return to Belarus.”

Tsimanouskaya asked Japanese police at Tokyo’s Haneda Airport to give her protection.

She also appeared in a video posted on the Belarusian Sport Solidarity Foundation’s (BSSF) website, asking the International Olympic Committee (IOC) to help her.

“I am under pressure and they are trying to take me out of the country without my consent. I ask the International Olympic Committee to interfere,” Tsimanouskaya said in the video.

The IOC said it had spoken to Tsimanouskaya and that she was with a Tokyo 2020 official. The statement quoted her as saying she felt “safe.”

It added the IOC and Tokyo 2020 would continue their conversations with Tsimanouskaya and the authorities “to determine the next steps in the upcoming days.”

The director of the IOC’s National Olympic Committee relations has been in contact with the athlete, Reuters reported citing an IOC official.

Chief Cabinet Secretary Katsunobu Kato added in comment during a news conference that authorities, including the International Olympic Committee, were working to confirm her intentions, and that Japan would take “appropriate steps” in cooperation with other bodies.

The United Nations refugee agency UNCHR and Japanese police are involved in the situation, Reuters said, quoting an IOC official.

Exiled Belarusian opposition leader Sviatlana Tsikhanouskaya wrote on Twitter that the Olympic runner “was forced by the regime” to leave the Games and that the athlete was “afraid to come back to Minsk.”

“No athlete should be forced this way,” Tsikhanouskaya added.

She said she had been removed from the team due “to the fact that I spoke on my Instagram about the negligence of our coaches.”

Tsimanouskaya had complained on Instagram that she was entered in the 4×400 meter relay after some team members were unable to compete.

“Some of our girls did not fly here to compete in the 4x400m relay because they didn’t have enough doping tests,” Tsimanouskaya told news agency Reuters from the airport.

“And the coach added me to the relay without my knowledge. I spoke about this publicly. The head coach came over to me and said there had been an order from above to remove me,” she said.

The head of the Belarus athletics team in Tokyo, Yuri Moisevich, told state-owned broadcaster STV the decision had been taken to make changes to the relay team, but they did not announce it immediately so as not to disrupt the athletes’ preparation.

“We intended to tell her everything, to explain it, especially as she was a reserve,” Moisevich said.

The Belarusian Olympic Committee also said in a statement that Tsimanouskaya had left the competition on medical advice. It cited problems with her “emotional and psychological state.”

The IOC has asked Belarus National Olympic Committee for a full response.

The BSSF quoted Tsimanouskaya as denying that she was even examined by doctors.

A source at the NGO said she planned to request asylum in Germany or Austria on Monday.