The Red Sox have made a significant addition to the lineup, announcing the acquisition of corner outfielder Kyle Schwarber from the Nationals. Pitching prospect Aldo Ramirez is headed back to Washington in return. To create 40-man roster space, Boston designated reliever Brandon Workman for assignment. 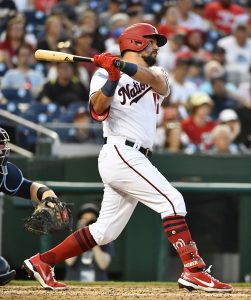 It’s the continuation of a rapid sell-off for the Nationals, who were straddling the line between buying and selling as recently as last week. A recent run of poor play has made their direction clear, with Washington moving a series of veterans in rapid succession. No move was bigger than the reported Max Scherzer – Trea Turner blockbuster with the Dodgers, of course. But Washington has also traded reliever Brad Hand and Schwarber today, and it seems there’s more on the horizon. Jesse Dougherty of the Washington Post reported this evening the Nats are also fielding offers on reliever Daniel Hudson, utilityman Josh Harrison and potentially on catcher Yan Gomes.

Schwarber is currently on the 10-day injured list on account of a right hamstring strain. It seems he’s still a couple weeks away from returning, but he was on an absolute tear before he went down. The 28-year-old won the National League Player of the Month award in June after blasting a league-best sixteen home runs. Thanks largely to that incredible run, Schwarber’s amidst the best season of his career. The left-handed hitting slugger has a .253/.340/.570 line (138 wRC+) with 25 homers across 303 plate appearances.

That level of play certainly warranted Washington’s $10MM investment in Schwarber last offseason. He’s playing the 2021 campaign on a $7MM salary, with around $2.4MM still to be paid through the end of the season. Schwarber is also guaranteed a $3MM buyout on an $11MM mutual option covering the 2022 campaign. Mutual options are rarely exercised by both parties, so the Sox are likely to view Schwarber as a rental acquisition. The midseason trade rules out any chance that Schwarber’s tagged with a qualifying offer this winter.

Schwarber has primarily been a corner outfielder over the course of his career, but it’s possible the Red Sox front office views him as a potential solution for their subpar first base situation. While he’s never played the position in the major leagues, it would be a surprise if he didn’t see some time there in Boston.

The Sox have gotten good work from Alex Verdugo and Hunter Renfroe in the corner outfield this year. Either of those players are capable of kicking over to center field in a pinch, but with top prospect Jarren Duran now in the big leagues, it seems likely there’ll be some days where Schwarber lines up at first with that trio manning the grass. Obviously, J.D. Martinez has the designated hitter spot spoken for.

However Alex Cora decides to manage his roster, there’s no question Boston’s making an offensive upgrade. The Red Sox hold a modest 1.5 game lead in the American League East over the Rays, so it wouldn’t be a surprise to see president of baseball operations Chaim Bloom and the front office continue to explore other acquisitions in the coming hours.

Neither team made mention of cash considerations, so it seems as though the Red Sox will assume the remainder of the money owed to Schwarber. That’s a rather significant development, as taking on the prorated portion of Schwarber’s $10MM luxury tax hit puts the Sox near the $210MM CBT threshold. Jason Martinez of Roster Resource estimates Boston’s current luxury number at just below $214MM. Alex Speier of the Boston Globe, however, reports the Red Sox are “scraping” the tax threshold but haven’t yet exceeded it. Speier suggests the club is exploring deals that might eventually take them over that mark, particularly as part of an ongoing effort to bolster the pitching staff.

In exchange for Schwarber, the Nationals pick up a promising young arm in the lower levels of the system. Eric Longenhagen of FanGraphs immediately slotted Ramirez as the #8 prospect in the organization. Over the offseason, Longenhagen wrote that the righty had a velocity spike that pushed his high-spin fastball into the low 90’s. Ramirez has a good changeup and advanced control, and he’s performed well this season. The 21-year-old has tossed 31 innings of 2.03 ERA ball in Low-A, striking out a decent 24.6% of opponents with a minuscule 6.2% walk rate.

The Schwarber acquisition ends Workman’s second stint with the Red Sox. Signed to a minor league deal after being cut loose by the Cubs, the right-hander tossed 18 innings of 3.50 ERA ball with Boston. His peripherals didn’t support that level of run prevention, though, as Workman has issued fourteen walks while striking out thirteen. It’s possible he’s traded before tomorrow afternoon’s deadline, but it seems likelier he’ll wind up on the waiver wire. If he clears waivers, Workman would have the right to elect free agency.