A racehorse startled onlookers on Saturday after she bucked her rider and made her way onto an interstate highway.

The incident took place at the Ellis Park Racing & Gaming racetrack in Henderson County, Ky. and was live-streamed on YouTube. Forty-five minutes into the stream, 2-year-old racehorse Bold and Bossy bucked jockey Miguel Mena and ran off the track before she could make her racing debut.

“We have a loose horse on the track,” the announcer told the announcer. “She has unseated the rider and is loose.”

Bold and Bossy found an exit and ran down Interstate 69, a four-lane highway sometime after 12:46 p.m. 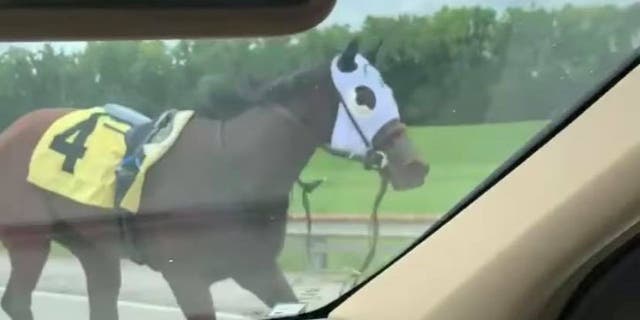 Racehorse Bold and Bossy startled onlookers on Saturday after she bucked her rider and made her way onto an interstate highway. Drivers who were traveling down Interstate 69 after 12:46 p.m. got a glimpse at the 2-year-old horse, including Cullen Stanley.
(Cullen Stanley)

Cullen Stanley, who was driving down I-69 at the time, managed to record a clip of Bold and Bossy running down the highway.

“I first saw something about three hundred yards down the road moving fast towards me that obviously wasn’t a vehicle,” Stanley told Fox News. “As it got closer it looked like a horse but my brain was telling me that it couldn’t be [a] horse because I’m on an interstate highway.”

He went on, “When it was about 50 yards away there was no more denying that a racehorse was heading right toward my car. Luckily she dodged my car and kept on running. Craziest thing I’ve ever seen in real life or a dream.”

According to WFIE – an NBC-affiliated television station in Evansville, Ind. – the Vanderburgh County Sheriff’s Office reportedly received a call about Bold and Bossy at around 12:52 p.m.

The Vanderburgh County Sheriff’s Office did not immediately respond to Fox News’ request for comment.

WILD HORSE ROUNDUPS RAMPING UP AS DROUGHT GRIPS THE US WEST

Stanley told Fox News he heard the horse was found by “the sheriff of a neighboring county.”

“[He] happened to be a few hundred yards behind me and was able to box [Bold and Bossy] in between his truck and the guardrail and get her back to the race track safely,” Stanley said.

Ellis Park Racing & Gaming confirmed to Fox News that Bold and Bossy was returned with her rider.

“We are thankful that Bold and Bossy was reunited safely with her owner following the incident,” said Jeff Inman, the general manager at Ellis Entertainment. “We are also pleased that the jockey sustained no injuries from the fall.”