Team Ireland’s Rory McIlroy and Shane Lowry moved into medal contention with two of the best rounds on day two of the men’s individual strokeplay golf.

McIlroy was within three shots of the lead after a five-under 66 on Friday, but saw that gap extended to four after a superb finish by Xander Schauffele.

Schauffele is set to lead on 11 under after an eagle on 14 and three final birdies saw him card an eight-under 63.

Lowry shot 65 – only bettered by Schauffele – to sit one behind McIlroy.

Great Britain’s Paul Casey is also seven under with one hole left to play. The 44-year-old Englishman was in one of the five groups unable to complete their rounds after adverse weather at the Kasumigaseki Country Club.

Mexico’s Carlos Ortiz is second after finishing on 10 under, while Japan’s Hideki Matsuyama, who won the Masters in April, is in a four-way tie for third on eight under.

Casey’s GB team-mate Tommy Fleetwood and Open champion Collin Morikawa of the United States are back on three under.

After an opening two-under 69, four-time major champion McIlroy charged up the leaderboard with two birdies and an eagle on the front nine.

Play was also stopped earlier on Friday because of rain and when the players returned McIlroy knocked in two more birdies to move to eight under – a tie for second and two shots behind Mexico’s Ortiz.

But a bogey on the last saw the 32-year-old Northern Irishman, competing for Ireland at the Games, drop back to seven under in the four-day event.

Ortiz, who shot a 67, led for most of the second round but saw 28-year-old Schauffele pull level after that blistering finish. 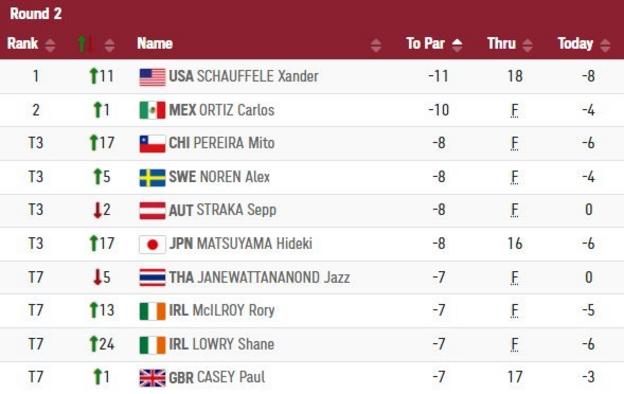