The latest outbreak started two weeks ago in the eastern city of Nanjing, where nine airport cleaners were found to be infected during a routine test. Since then, the cluster has spread to at least 26 cities across China, including a tourist hot spot in the southern province of Hunan and the capital Beijing.

In Nanjing, a city of 9.3 million people, residents went through three rounds of coronavirus testing in two weeks. Residential compounds with confirmed cases were locked down, while cinemas, gyms, bars and libraries were shuttered.
In Zhangjiajie, where a theater performance attended by thousands of people has fueled concerns of a super-spreader event linked to the Nanjing cluster, all tourist destinations were shut down and residents are banned from leaving their compounds.

Restrictions have also been ramped up in Beijing, which reported its first local infection in nearly six months last week. Since then, five local cases with travel history to Zhangjiajie have been detected. The city has banned people from medium- or high-risk areas from entering, suspending flights, trains and buses from Covid-hit places.

Huang Yanzhong, senior fellow for Global Health at the Council on Foreign Relations, said Chinese authorities are responding to the threat of the Delta variant with the same playbook used in previous outbreaks, but in an even more stringent manner — several cities have been placed under effective lockdowns.

“It shows the problem of diminishing returns of the existing ‘zero-tolerance’ approach,” he said.

Elsewhere in the world, countries with relatively high vaccination rates are increasingly choosing to tolerate a degree of transmission, as long as it doesn’t translate into a surge in hospitalizations and deaths. In China, however, authorities appear intent on imposing strict restrictions despite having administered more than 1.65 billion homegrown vaccine doses — ranking above the US in terms of doses administered per 100 people.

The rapid spread of the Nanjing cluster to cities across the country has triggered concerns over the level of protection currently offered by Chinese vaccines against the Delta variant.

On July 22, two days after the Nanjing cluster was first detected, a health expert in the city said the “vast majority” of those infected there had been vaccinated, except for one person under 18 years old. Airport staff, along with medical workers and border control personnel, were among the first to be vaccinated in China.

Chinese authorities have not offered a fuller breakdown of how many subsequent cases were also vaccinated.

Several other countries that used Chinese vaccines have also reported infections among vaccinated people. In June, Indonesian officials said more than 350 medical workers in the country had contracted Covid-19 despite being inoculated with vaccines produced by Chinese company Sinovac Biotech.

Breakthrough cases have also been reported among people fully immunized with more effective vaccines, such as those produced by Pfizer/BioNTech and Moderna. In a report released Friday, the US CDC found that about 74% of the 469 Massachusetts residents who were infected in July had been fully vaccinated — with the Delta variant revealed as the main culprit.

Chinese experts have tried to assure the public that Chinese vaccines are still effective against the Delta variant.

On Saturday, Shao Yiming, an expert at the Chinese Center for Disease Control and Prevention, said at a news conference that breakthrough infections are a “normal” phenomenon, while stressing that such cases are only a minority among vaccinated people around the world. Feng Zijian, another Chinese health expert, added that while their immunity level against the Delta variant may be lower, existing vaccines still provide good enough prevention and protection.

But Huang, the expert at the Council on Foreign Relations, said the relatively low efficacy of Chinese vaccines against the Delta variant would only push authorities to double down on their “zero tolerance” containment-based approach as opposed to the mitigation-based method adopted elsewhere.

“That means China is likely still months away from opening its borders to the world,” Huang said.

It remains to be seen if repeated lockdowns and mass testing drives can sustain public support in the long run. Tolerance for such measures could begin to wane if, as expected, the government maintains its hardline approach until after the Beijing Winter Olympics in February next year.

But some prominent Chinese public health experts have raised the prospect that like elsewhere in the world, China will eventually need to learn to coexist with the coronavirus.

Zhang Wenhong, an infectious disease expert at Shanghai’s Huashan Hospital, said it might not be possible for existing vaccines to eradicate infections, and transmissions might still happen even after everyone is fully vaccinated.

“More and more people now believe that the epidemic will not end in a short period of time, and may not end in a long time,” he wrote on Weibo. Whatever path China takes in the future should ensure “its connection to the world, a return to normal life, while at the same time protecting citizens from the fear of the virus,” he added.

The fastest Asian man over 100 meters … ever 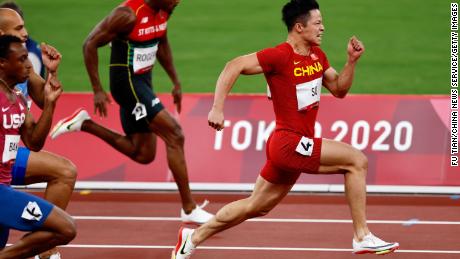 Chinese sprinter Su Bingtian made Olympic history Sunday night, becoming the first Asian athlete to line up in the men’s 100 meter final since Takayoshi Yoshioka in the 1932 Los Angeles Games.

The 31-year-old arrived in Tokyo as a rank outsider, having previously been eliminated twice at the semifinal stage in London and Rio.

But in an extraordinary night of high drama, which saw American medal favorite Trayvon Bromell fail to qualify for the final, Su appeared to defy all expectations, scorching across the finish line of the third semifinal in first place — and setting a new Asian record of 9.83 seconds.

The time — the fastest of all semifinalists — positioned 5 ft 8 in (173 cm) Su as an unlikely favorite heading into the Tokyo 2020 final. On the night though, it wasn’t to be for him. Su finished sixth, clocking in at 9.98 seconds, with Italy’s Lamont Marcell Jacobs taking gold in 9.80 seconds.

“Su Bingtian, you’re a miracle of the entire Asian continent! The pride of all of Asia!” said a top comment with nearly 300,000 likes.

After the race, Su told Chinese state media that stepping on the track had fulfilled his Olympic dream.

“I ran out of my energy in the semifinal. Finishing the final under 10 seconds is not an easy thing for me,” he added.

Indeed, Su was the first Asian-born athlete to officially break the 10-second barrier, the traditional measure of a truly world-class sprinter. Only a select group of Asian athletes have since achieved the feat.

China to the United States: Let’s talk about these Chinese IPOs

Chinese regulators have a message for their US counterparts: Let’s talk this out.

The China Securities Regulatory Commission (CSRC) on Sunday called for Beijing and Washington to “enhance communication” on how Chinese companies should be regulated.

Regulators from both countries should “properly address issues related to the supervision of China-based companies listed in the United States, so as to form stable policy expectations and create a good regulatory environment,” the CSRC said.

The statement came days after the Securities and Exchange Commission told its staff to ask for more disclosures from Chinese firms seeking to go public in the United States before it will approve any plans for them to sell shares. Regulators are taking a much more cautious stance when it comes to allowing Chinese firms to sell shares in America following the disastrous meltdown of ride-sharing giant Didi, which faced a massive crackdown in China shortly after it started trading on the New York Stock Exchange.

China’s scrutiny on that company — authorities cited concerns about data and cybersecurity in a decision to ban Didi from app stores — is part of a wider push by the Chinese government to exert more control over its homegrown tech giants, many of which have chosen to go public in New York instead of Hong Kong or Shanghai.

“In light of the recent developments in China … I have asked staff to seek certain disclosures from offshore issuers associated with China based operating companies before their registration statements will be declared effective,” said SEC chair Gary Gensler in a statement on Friday.

The SEC is specifically concerned about Chinese companies that are structured as so-called Variable Interest Entities (VIEs). Although they’re based in China, these companies are set up as an offshore shell company — often in tax-friendly places like the Cayman Islands — to issue stock.

In its statement Sunday, the CSRC also sought to quell concerns about Beijing’s crackdown on Chinese firms, which have spooked investors and lead last week to a massive stock market sell-off.

The CSRC has “always been open to companies’ choices to list their securities on international or domestic markets,” it said in its statement, adding that it will communicate closely with other authorities in China to stay transparent about policy affecting such companies.