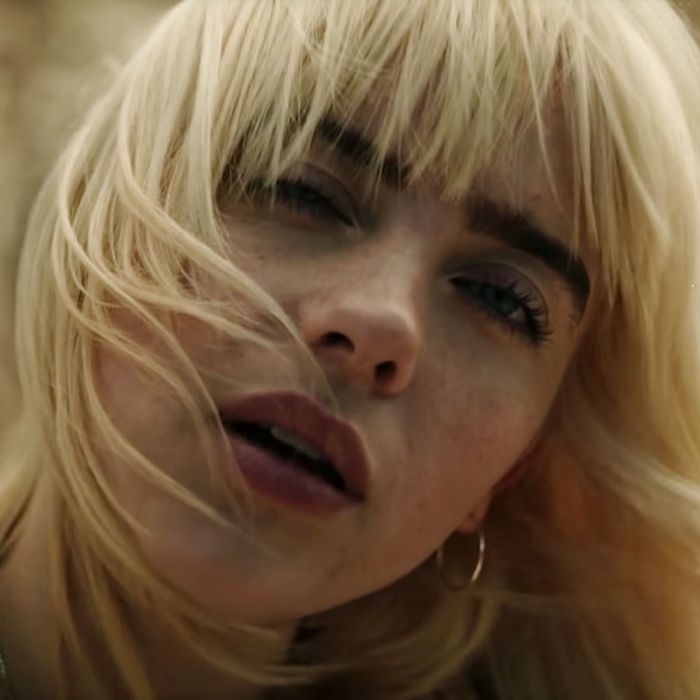 Her first album made mutant pop with unconventional instrumentation, but Happier Than Ever is at once the more conventional-sounding body of work and the less predictable of the pair.
Photo: Billie Eilish/YouTube

Billie Eilish’s meteoric ascent has seen much turbulence, both avoidable and unavoidable. By the time she entered the final year of her teens last December, she had already sold a million records, swept the major categories at the Grammys, topped both the Billboard 200 and Hot 100 charts, sang the theme song for a (still-yet-to-be-released) Bond film, starred in a documentary about her life, and struck up a friendship with her childhood idol, Justin Bieber. Parallel to all this, unfair criticism of her body and legitimate pushback for her more feisty music takes seemed to throw the young star into a defensive position. She fell back for a sec, then began to renegotiate her relationship with the public. She ditched the jet-black mop with slime-green highlights that had become a signature look throughout the rollout of her 2019 debut, When We All Fall Asleep, Where Do We Go?, and its tour, and bid farewell to the long, flowing suits some onlookers crassly compared to ’90s rapper clothes, returning to her natural blonde locks and unveiling a new wardrobe that challenged the presumption that she was leery of people’s prying eyes. Eilish returned to a public that was a bit harsher, a bit less forgiving than before. The training wheels are off. It’s easier to draw smoke. Old gaffes come back now. Her videos earn more scrutiny. She was accused of queerbaiting. She had to apologize for mouthing a slur in an old video. It has made Eilish by turns more protective of herself and more clear in her diction. The music she released this year opened new avenues in her singing and writing, pushing past the claustrophobic synth pop of her hit “Bad Guy” and, at times seemingly out of necessity, mirroring moments of unflinching honesty in The World’s a Little Blurry. Where do you go after your first album rakes in attention and accolades many artists never see in a lifetime?

Happier Than Ever, Eilish’s sophomore album, spells out the differences in the singer’s life in greater detail than what we’ve surmised from the bread crumbs in her Instagram posts and interviews. In many ways, it’s your textbook sophomore project: It is, in part, a reaction to the jarring experience of rapidly becoming a public figure behind a hit album and the unexpected life changes this entails — the love, the scrutiny, the lack of boundaries, and the heightened parasocial expectations. Eilish seems to handle it in stride in a batch of songs that run more overtly personal than they did last time around. Early on, in “I Didn’t Change My Number,” the singer is litigating who gets to have access to her behind the scenes. “NDA” is a look at the nagging pitfalls of celebrity: “Got a stalker walking up and down the street / Says he’s Satan and he’d like to meet / I bought a secret house when I was 17 / Haven’t had a party since I got the keys.” The interlude “Not My Responsibility,” originally a piece that played during the When We All Fall Asleep tour, is a stern rejoinder to anyone who gossiped about the singer’s body: “I feel you watching, always / And nothing I do goes unseen / So while I feel your stares, your disapproval, your sigh of relief / If I lived by them, I’d never be able to move.” Where on the first album, Billie sometimes feels like a spectral narrator wandering through scenes of disarray, pondering the afterlife, and tiptoeing through salacious drug parties, here, she is owning her body and the lust and rage and pain and the rational and irrational pangs that come with it.

While Eilish coolly rebukes stalkers, gossips, abusers, and predatory men, she takes time to let listeners know that she isn’t unhappy, only taking out the trash in her life and demanding the respect she deserves. Her growing independence is matched by a vastly expanded musical palette. Working closely again with her older brother, Finneas, Eilish branches out into a wider world of sounds but preserves her debut’s disarming quiet. “Billie Bossa Nova” is a sparse salute to Brazilian music; the snarling “I Didn’t Change My Number” and the kiss-off “Lost Cause” both feel indebted to ’90s hip-hop soul. “Goldwing” is a saintly choral number that hangs a sharp left into the kind of warped vocals and electronics you’d sooner expect from Björk. The disparate threads of the advance singles — see: the subtle nu-jazz accents in “My Future,” the gutting folk of “Your Power,” and the sinister electropop of “Therefore I Am,” one of the few callbacks to the sounds of When We All Fall Asleep — are tied together into an album that, like its predecessor, sets itself apart from the sonics most contemporary pop stars favor. It carries a step further the rustic minimalism of the songs Jack Antonoff produced for Taylor Swift; opener “Getting Older” manages to feel both plush and delicate and barely there. Eilish’s first album made mutant pop with unconventional instrumentation, but Happier Than Ever is at once the more conventional-sounding body of work and the less predictable of the pair. There aren’t any EDM tunes or bright ’80s-rock choruses, no crossover-happy trap beats and no unexpected pop-punk jams. The only qualities tying Happier Than Ever to this year, or even this decade, are lyrics like the line in “Billie Bossa Nova” in which she tells a guy to lock his phone when they’re together.

Eilish’s deceptively muted vocals and unflinching, commanding presence make a tantalizing combo, and the unexpected twists that Finneas’s production takes underfoot all carry this album to places the first one wasn’t prepared to visit. The strides both siblings have made toward improving their craft over the past two years are never more apparent than on Happier Than Ever’s title track, the longest song in the young singer’s catalogue to date. You think it’s going to mirror the wispy, exceedingly dark trilogy of songs that close out the last album when it creaks in like a sad, old country breakup tune. It’s a ruse. Midway through, Eilish’s whisper explodes into a chorus of harmonizing screams as she fires darts at her ex-boyfriend, explaining in no uncertain terms how and why he blew it and imploring him (and maybe us as well) to “Just fuckin’ leave me alone” in a squall of thick fuzz and feedback. It’s a shock not unlike the swelling high note at the climax of the Bond theme “No Time to Die,” another wild card she had stashed up her sleeve all along. You wonder what else she’s capable of as the closer “Male Fantasy” lands us gently with talk of recovery and therapy. Maybe we’ll know in 2023. You move at a different pace when your major competition is yourself.