Ashley Judd is walking again after shattering her leg in an accident in the Congo nearly six months ago.

The actress and activist went hiking through the Swiss National Park in eastern Switzerland this weekend, going slowly as she continues working on her recovery. 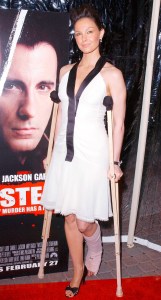 “Dear Friends, It is with reverence and quiet awe I offer this update,” she captioned a video from her hike via IG. “Today, five months and three weeks after the accident in the Congolese rainforest, I walked again, and in what fashion!  I hiked in the #SwissNationalPark. Stepping in, I felt in my ease, my natural garment of self, at home in my spirit. My leg and foot, worked beautifully. I walked up hill on uneven surfaces for an hour confidently and came down carefully and easily. I rested in a meadow on God’s fecund earth for hours.”

Judd was walking in a Congo rainforest in February when she tripped over a fallen tree, shattering her leg. Judd, a frequent visitor to Congo, was doing work to track the Bonobos, an endangered great apes species.

The sister of Wynona Judd and daughter of Naomi Judd also revealed how doctors didn’t expect her to be able to move her foot again so soon.

“The video of my foot moving is unheard of,” Judd said. “We expected my foot – if ever – to *begin* to move in one year. In four months to the day, she went blew us all away. Now, after crying while trying to spell the ABCs with a paralyzed foot….well, you see!
My leg will never be the same. She is a new leg. And I love her. We are buddies. We have a come a long way and we have a fabulous life ahead.”