A man in Arizona went nearly a month without knowing he had contracted the plague, which can be deadly if not treated promptly, according to a new report.

The man recovered, but his case underscores the need to identify infections with serious and potentially contagious pathogens, such as Yersinia pestis — the bacterium that causes plague — in a timely manner, according to the report, from the Centers for Disease Control and Prevention (CDC).

The 67-year-old man first went to the emergency room on June 18, 2020, with symptoms of dehydration, nausea and weakness, according to the case report, which was published Thursday (Aug. 5) in the CDC journal Morbidity and Mortality Weekly Report. Doctors treated him with IV fluids and released him shortly thereafter. But he came back the next day with three painful red bumps on his leg that he thought were bug bites. This time, doctors suspected he had cellulitis, a skin infection caused by bacteria. He was given prescriptions for two antibiotics and again released from the hospital. 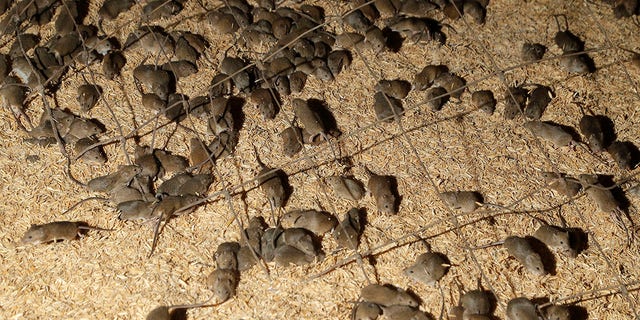 In this May 19, 2021, file photo, mice scurry around stored grain on a farm near Tottenham, Australia. A mouse plague that has ravaged vast swathes of eastern Australia has forced the evacuation of a prison. Humans can catch the plague through fleabites or contact with the tissue or bodily fluids of an infected animal.

COVID-19 OR RSV? SYMPTOMS TO WATCH FOR

The man came back the next day with more serious symptoms, including fever, dizziness, chills and “swollen glands.” He was admitted to the hospital and treated with antibiotics for suspected sepsis, potentially life-threatening body-wide inflammation that can result from an infection.

He tested negative for COVID-19 twice, and a blood sample was sent to a commercial laboratory to help identify the cause of his infection. On June 30, 2020, the lab reported that the man tested positive for Yersinia pseudotuberculosis, a bacterium that can spread from animals to people and can cause fever, abdominal pain and, in some cases, a rash and blood infection. It’s closely related to Yersinia pestis. The man started a two-week course of the antibiotic vancomycin and was allowed to leave the hospital on July 1, 2020.

But the diagnosis of Y. pseudotuberculosis would turn out to be wrong. On July 10, 2020, the hospital sent a sample of the man’s blood to Arizona State Public Health Laboratory, which identified Y. pestis in the sample. Health officials confirmed the diagnosis of plague on July 15, 2020, nearly a month after the man first experienced symptoms.

WHAT IS THE NEW DELTA PLUS VARIANT?

He was then prescribed the appropriate treatment, which in this case was a 10-day course of the antibiotic doxycycline. The delay in diagnosis could have threatened the man’s chances of survival. “This patient did not receive high-efficacy antibiotic treatment … until approximately 30 days after symptom onset,” the report said.

The man’s eventual recovery may have been due, in part, to his early treatment with antibiotics; although they were not the best antibiotics to treat plague, they do have some effectiveness against plague bacteria, the report said.

Plague is perhaps best known for causing the Black Death in Europe in the 1300s. The infection still occurs today, but it is very rare, with about seven cases of plague occurring in the U.S. each year, on average, according to the CDC. The man’s case was the first reported case of plague in Arizona since 2017, the authors said.

Humans can catch the plague through fleabites or contact with the tissue or bodily fluids of an infected animal. The man reported handling a dead pack rat (a rodent belonging to genus Neotoma) while wearing gloves before he became ill.

Early and prompt treatment with antibiotics is important to avoid serious complications, including death. Before the advent of antibiotics, the death rate from plague in the U.S. was about 66%, but today the rate is around 11%, according to the CDC.

In Arizona, hospitals and labs that identify any bacterium within the Yersinia genus are required to submit the samples to the state public health lab for further testing within one business day, the report said. But in this case, there was a 10-day delay in submitting the sample. The reason for the delay is unclear, but the laboratory staff underwent re-education about this requirement, the report said.

“Rapid reporting might have led to timelier diagnosis of his acute illness and initiation of a more effective antibiotic therapy closer to disease onset,” the report concluded.